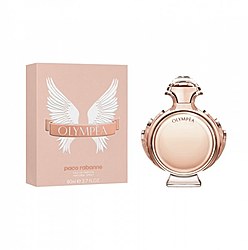 The case when the analogs are better than the original! But thank you Paco Rabanne perfume for the idea)))

With the aroma of Olympia I was familiar analogues. But finally I bought the original and now know where grow the roots of those perfumes that I tested....

I have a probe that I bought on the website of Buthidae.

The front side is decorated like a box of perfume. In the photo the color pink, but in reality it is a matte-orange-pink background, which shows a delicate white wings. 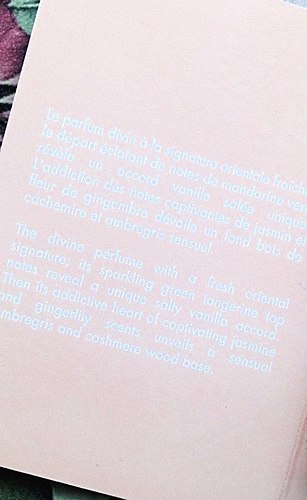 All inscriptions gold plated rose gold and I love it. Gilding is tired, but rose gold I meet, probably for the first time. And it looks cute on a Matt background.

The colors are very well convey the direction of the scent.

On the reverse side of a huge lineup and other information - all in English. 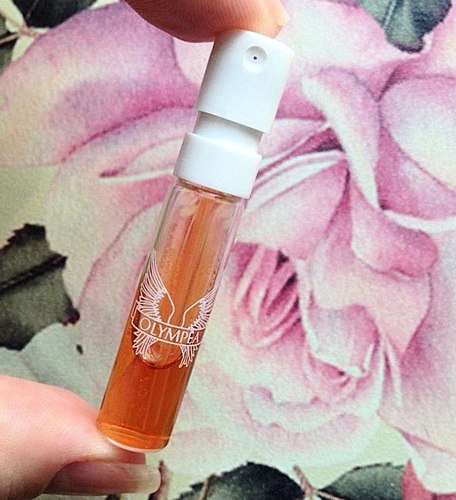 Inside I have some information about the perfume, but it is also in English. Here is the description of the fragrance, the notes and direction, but about it I will write later. 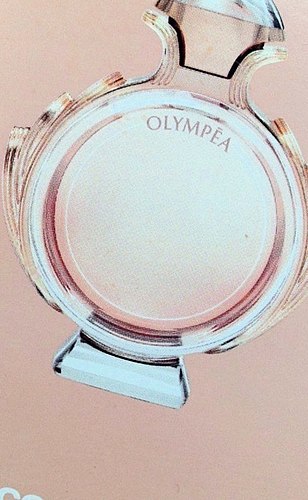 Inside of booklet is invested long-awaited probe on the right side shows the bottle. The water in the probe of a bright red color. 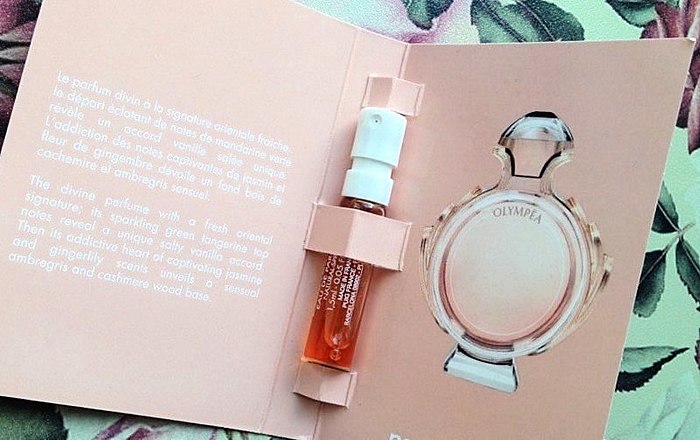 The bottle is decorated in a very original and masculine fragrance in this series. Male "Invictus" in the form of a Cup, and women's design perfume also tells about the win, as decorated with a Laurel wreath. And so a wreath in Ancient times was awarded the winner. So Olympia is a go-getter with a reward!

At the sides of the vial of Golden elements - it's just the same wreath. 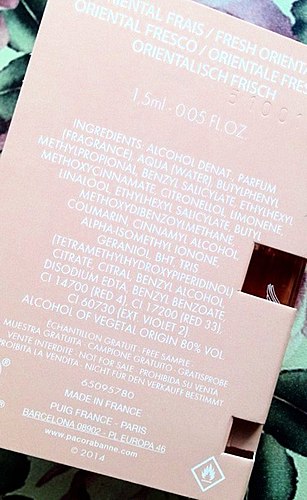 The probe is small but easy to press to spray, as there is a recess under the finger. 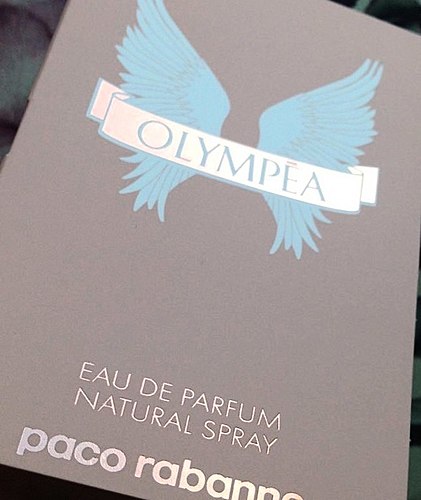 Many people know that under the guise of perfume we sell more than just flavor. It's a beautiful life, attracted the looks of men, rest and bliss, and perhaps even happiness.... Olympia also invites us to feel like a goddess, wrapped with love...

A few promotional words about the fragrance:

Olympea eau de Parfum from PACO RABANNE is an antique beauty and grace of a Greek goddess. Delight and worship follow the owner of a unique fragrance everywhere, leaving behind the bewildered eyes and broken hearts.
The long-awaited new French brand truly legendary. The painstaking work of talented perfumers Dominique Ropion and Anne Flipo heralded the emergence of an extraordinary composition, forcing the fans to freeze in anticipation. Released in 2015, the aroma captivated critics with his confidence, harmony.
Perfume belongs to the family of fragrances Oriental spicy. He creates the image of the goddess of love and beauty Aphrodite, granting eternal youth to anyone who will drink of the wine of her Cup.
Top notes of the songs sound cheerful green Mandarin, romantic overtones of Jasmine, and Hawaiian ginger. The fresh morning breeze rolled heart notes enclosed in sea salt and Bourbon vanilla. Captivating base notes of the loop are sandalwood, amber and casimiroa tree.
Sophisticated pink bottle has the shape of a Laurel wreath worthy of the inhabitants of Olympus. Eau de Parfum Olympea perfect as all on what is the name of the great Maestro Paco Rabanne.

As a fragrance I feel?

A very unusual start, not like perfume. Tickles the nose a salt, or rather a peck of salt, impregnated with green Mandarin and a light Jasmine. But this quickly subsides, and the aroma begins to capodivacca, but as I say only instead of powder and salt.

There really is a lot of salt and there are marine Association, something like the men's fragrances. I would have altered is the sound, they are very serawit, so salty powdered. The vanilla here is neat, it's not spicy Montanesca vanilla and not a pastry shop. Here woody vanilla combined with the aroma of amber, such as in SI sooooo watered down version.

Perfume quickly gets rid of fresh, tart green notes start, and then sounds the same at all times and very monotone. The smell during the day podnadoedaet, because salt suppresses the purity of the flavor and want if to clear it from the skin and pull all the ingredients from salt.

Perfume I like, if it is constantly updated - it is so fresh and beautiful, and not sinking to my warm derivatise base. Over time, the salinity begins to Kaliti, as if the truth got in my mouth salt. 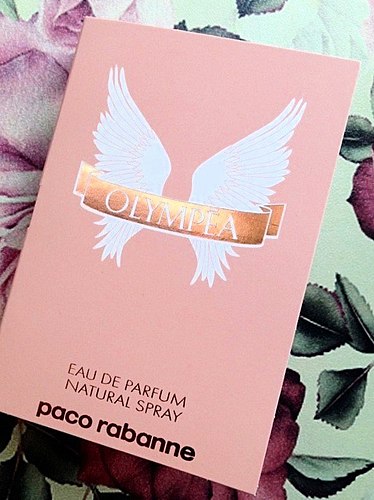 if you take Armani si much it is diluted, to left of wood and vanilla, and then lower it all in salt - get monotonous sound of Olympia. It's different flavors, the direction is similar, but SI in 100500 times richer.

My story, before meeting with an Olympia.

I wanted to test the scent and sniff a few counterparts. And I was surprised that there pricesuse the smell of salt, thought a copy is a copy. And was sure that in the original salt will be more delicate, but it was the opposite. It is in the original perfume scent salt cleaner, but it is so much that even thought he takes the nice pink color of the perfume in the direction of the scents of the sea theme..... It is impossible not to note that such note is not familiar to me like many in Olympia and a pronounced salt, but that would be it a bit smaller....

Counterparts, which I came across sin no beautiful and green the starting music is a minus., They almost immediately smell like Olympia in the middle, but with a much smaller amount of salt, but that's just what I like. I'm happy to use an analogue of the Russian production, but the original Olympia is not very liking, plus she's still with a little time zakislate and analogues zalamyvayutsya.

I have a probe in the embodiment of Cologne, durability almost the same, 5-6 hours is kept. Aroma pretty quickly begins to sit close the skin, although neat derivatise-vanilla plume with a pronounced salty-marine is.

For whom the perfume?

For girls and women who love delicate and woody aromas. It's something casual and simple for the office, but at the same time emphasizes not only business skills, but the femininity of the wearer of the perfume.

You can wear this fragrance on dates on the daily walks.

Conclusion: the perfume interesting, unusual and unconventional, is clearly not like any other. This is clearly a novelty in the world of perfumery, I'd recommend to see before buying. Serawit alonistioti, the flavor is monotonous in the heat a bit stifled. They are overdone with salt, forgetting to add a delicate and feminine notes.

For me perfume is not associated with the podium or winning. I would say that the girl is the only winner in a circle of colleagues, friends and so on. This is clearly the flavor is not to scale and no laurels my imagination draws.

But I can't imagine that someone this smell was clearly unpleasant. Maybe not everyone will love to buy and wear, but disgusted perfume is.

Those who do not like to stand out, do not want to get credit for the victory in public, and wants to be a jewel and feminine girl in her narrow circle - the fragrance is what you need. Sure that men will like and they will certainly not be bored the softness and femininity of the wearer of the scent.

I personally don't buy that, dapolito probe, analog and all. I'll try to get closer to Olympia Intens - there amber and vanilla without salt, maybe I'll like it more.

My love at first sight ♡ Cool palette for creating a wide variety of makeup! ♡ But I can’t put 5 stars, there are flaws ♡ Detailed analysis of all points ♡ where to buy ♡ my impressions of using ♡ many letters ♡ many photos !!!!!3 monthsDecorative cosmetics

Hibiscus tea according to the Nl recipe pleasantly surprised me: it perfectly cleanses the body. Therefore, without a doubt, I recommend it to those who are on a diet or PP. 👌&nbsp;about 1 monthHealth products

Purification with water, effective as soap, as soft as cream-foam!about 1 monthCaring cosmetics

24 hours too loudly,and with the application as it is not very good(shades of 310 and 340)4 monthsDecorative cosmetics

Smart toner from Avon - my impressions of the shade Light Nude. The BEFORE and AFTER photos.5 monthsDecorative cosmetics

Grandma released a decent mask! But you need to know about the cons) the Result of the long hair + full parsing of the whole (a lot of photos of the hair)5 monthsCaring cosmetics