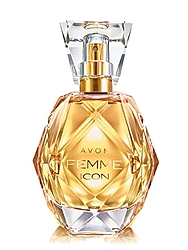 That autumn has come, and soon winter! What flavor to use then?

Woody raspberry chic, wrapping its warmth - this is the first impression I had when I applied the first drops of the Avon Femme Icon fragrance ! This is certainly a winter fragrance that radiates the passion of the aphrodisiac patchouli. It first appeared in the Avon catalog 12/2015.

The bottle is located in a beautiful golden box on which the name of the fragrance is printed in silver letters - “Avon Femme Icon” , which means “ woman icon (style) ” in French .

@ 123 @
Indeed, perfume water fascinates with its unusual and bizarre combination of notes

The aroma belongs to the category of floral-woody-musky.

I think it will be very interesting for you to learn about the components that make up his pyramid.

So, component number 1 is raspberry:

Ancient Greek mythology attributes the origin of raspberries to the nymph Ide . She secretly raised the baby Zeus, who was hiding from Crohn, who was eating his children. The beautiful nymph got hurt when she was picking a sweet berry for the baby Zeus, and a beautiful and fragrant raspberry appeared from the drops of her blood. In Latin, raspberry bushes sound like Rubus idaeus , which means “Ida bush” . Raspberries have a pronounced fresh-sweet taste and wonderful aroma . No wonder the winged expression, symbolizing a carefree life, sounds like "not life, but raspberries."

The iris got its name for its brightness in honor of the ancient Greek goddess Irida, the patroness of the rainbow , who descended from Olympus to people in seven-color robes. The author of the name is the ancient Greek physician Hippocrates. In culture, this flower has been known for over 2000 years and is revered not only for its beauty, but also for the aroma of the root , extracts from which are used in the manufacture of high-quality perfumes, liquors, wines and pastries.

Patchouli is a perennial shrub tropical plant of the genus Pogostemon (Pogostemon). Their leaves are famous for their strong and attractive aroma: that is why they have been used in perfumery for centuries. The birthplace of patchouli is Asia, namely the Philippines , but now this plant is also found in West Africa and South America.

The fact that you are holding the miracle of perfumery in your hands is also evidenced by a luxurious bottle of diamond cut that shimmers in the light with all its facets. Insanely beautiful cap crowns his composition, causing genuine admiration!

On the box there is data on the composition and manufacturer.

The aroma is distinguished by excellent durability, more than 8 hours on the skin, and on clothes - much longer.

The price in the catalogs varies between 699-1065 rubles. It was this bottle that I got through the promotion in 11 catalogs (it was sent as a prize for the second order within the same campaign).

I recommend trying this fragrance and I hope that you will feel the same as the company promises:

Thank you for your attention, have a nice day!

Delicious .. Delight and even one matte hue included)) I am 99.9% satisfiedabout 1 monthDecorative cosmetics

One of my favorite blush!Welcome to the world of orchids and roses!5 monthsDecorative cosmetics

If your goal is youth, then you are not here. If you are looking for just a good cream - then go)3 monthsCaring cosmetics

First time for everything :) My first electric toothbrush :)4 monthsTechnique for beauty and health

WONDERFUL !! 3 year my must have! (Photo a lot !!)3 monthsDecorative cosmetics

This time I guessed the shade of lipstick! photo5 monthsDecorative cosmetics